On this Day in History: Farquhar’s The Beaux’ Stratagem First Performed 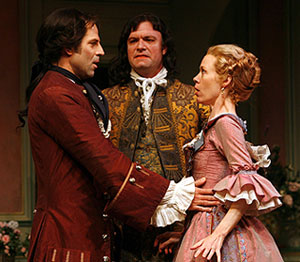 Christopher Innvar, Ian Bedford, and Veanne Cox in the 2006 production of The Beaux’ Stratagem at The Shakespeare Theatre Company in Washington, D.C. (© Carol Rosegg)

On this day in history, March 8, 1707, British playwright George Farquhar’s The Beaux’ Stratagem made its debut in London at the Theatre Royal in the Haymarket. This theatre is usually simply called The Haymarket.

George Farquhar (1678-1707) began his career in the theatre as an actor until he accidentally wounded a fellow actor. Abandoning acting, he set out to write for the London stage. His wife tricked him into marriage by pretending to be an heiress. Farquhar forgave her and the marriage was evidently happy. His two plays were The Recruiting Officer (1706) and our play today. Both plays were successful, yet Farquhar nevertheless died at age 30 in poverty as The Beaux’s Stratagem made its initial run.

If you haven’t read or seen performed this classic play in awhile, here is a simple summary of its complex plot by Martin S. Day: “Aimwell and Archer are the beaux, and their stratagem is to recoup their lost fortunes by marrying rich country girls near Litchfield by means of a complicated imposture. Archer weds Dorinda, daughter of Lady Bountiful. Aimwell almost seduces Mrs. Sullen, but she is saved because a gang of thieves breaks into the house. The heroes subdue the ransackers, and Mrs. Sullen and her churlish husband agree to divorce. Aimwell is to be her next husband.”

Here a few notes I once published in an essay for Salem Press years ago: Unlike most Restoration comedies of manners, The Beaux’ Stratagem is set in the country instead of London. As a result of the country setting emphasis is placed on low characters—innkeepers, servants, and highwaymen—instead of fashionable society. Archer and Aimwell, however, are newly arrived from the city and much of the play’s force derives from the contrast of country life versus city life. The two settings of the play, the inn and Lady Bountiful’s house reflect this conflict.

An inn in Litchfield is a way station for travelers coming and going from London to the country. As such it is utterly corrupt. At the inn a dishonest highwaymen plot to commit crimes with the complicity of a crooked innkeeper who even tries to corrupt his daughter for money. At the inn beaux from London plot stratagems. It is the forces from the inn that invade Lady Bountiful’s house in an attempt to destroy it.

In contrast to the world of the inn, Lady Bountiful’s house represents the simple virtues and charity of the best of the country. At Lady Bountiful’s house benevolence and concern for others dominate. Here the sick are healed and the corrupt are converted to virtue. This world is invaded by forces from the corrupt town by means of the highwaymen from the inn and by means of the beaux from the city. The robbers attempt to steal material goods while the beaux attempt to steal female virtue as well as money in Dorinda’s fortune. These corrupt forces eventually are defeated or neutralized while the country values of Lady Bountiful dominate at last.

On this Date: Premier of The Way of the World

The Premier of The Way of the World

The premier of what many consider the greatest comedy of manners in English theatre history occurred sometime in March of 1700 when William Congreve’s (1670-1729) The Way of the World first took the stage at Lincoln’s Inn Fields in London. It was to be the last of Congreve’s plays. After the poor initial reception Congreve abandoned theatre for more profitable ventures.

If you don’t remember the details of the plot, nobody can blame you. It’s complicated even by Restoration comedy standards. Here’s a short synopsis from Martin S. Day:

Lady Wishfort, in addition to her own estates, controls the property of Mrs. Fainall, her daughter, and Millamant, her niece. Mrs. Fainall’s former lover, Mirabell, is now interested in Millamant. Mirabell disguises his servant Waitwell (already married) as a nobleman, hoping for his marriage to Lady Wishfort. Then, on the threat of telling the world how he was duped, Mirabell can blackmail Lady Wishfort into giving him Millamant and her property.

Learning of his wife’s former relations with Mirabell, Fainall threatens full revelation unless all property is signed over to him. The sweethearts, Millamant and Mirabell, come to an agreement, but it appears that their fortunes are ruined. Mirabell, however, produces a deed from Mrs. Fainall before her marriage that conveys all her property to Mirabell. Triumphant in law and in the ways of the world, Mirabell is united to Millamant.

Maggie Smith with Jerermy Brett, “The Way of The World”, Stratford, Ontario, 1976.

Here is a short piece I wrote for Salem Press years ago about the physical world of The Way of the World:

William Congreve’s The Way of the World is the quintessential English comedy of manners. As such, the world of this play revolves around the values of fashionable seventeenth-century London.

London, England. The world of the play is a world of coffee-houses and periwigs and elaborately formal dress. It is an upper-class world of gallants, fine ladies, and would-be gallants and attractive ladies. The world of trade and agriculture surrounds this world but is not a part of it except by way of contrast.

A Chocolate-house. Act One takes place at a chocolate house. Such houses as Will’s near Covent Garden and White’s near St. James Park were fashionable meeting places of young gallants and wits. Often gaming was associated with them.

St. James Park. Act Two occurs out of doors in the fashionable Mall area of St. James Park. The Mall was a long tract in St. James that was formerly used for playing paille-maille, or pall-mall. By the time of this play it was known as a fashionable park used for walking, for meeting lovers, and for displaying one’s fashion. It is often confused with Pall Mall, another park close by to the north.

The Country. Although no scene in the play occurs in the country, the country always is in the background. Sir Wilful Witwoud is a country booby who serves as a butt of ridicule for all. His half brother, Witwoud, has done all he can to eradicate traces of the country from his manners, dress, and speech, but without success. No character in the play is associated in a positive way with the country. Millamant, perhaps the most normative character of the play loathes the country, saying, “I loathe the country and everything that relates to it.”

On This Date: The Premier of The Man of Mode, or Sir Fopling Flutter

The Premier of The Man of Mode, or Sir Fopling Flutter 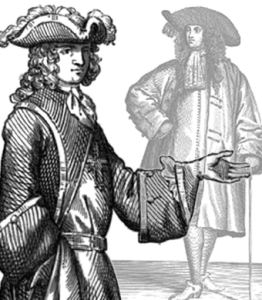 On this date in 1676 Sir George Etherege’s (c,1634-1691) play The Man of Mode, or Sir Fopling Flutter had its first performance at the Duke’s Theatre in London. Sometimes shortened to Sir Fopling Flutter, the play is as ideal a representative of Restoration comedy of manners or comedy of wit. When the plots of these kinds of plays are laid out in a short synopsis everything just sounds silly. Nevertheless, if you haven’t seen or read the play since college, here is a short synopsis from Martin S, Day:

The central character, Dorimant, is casting off an old flame, Mrs. Loveit is currently conducting an affair with Belinda, and is very much interested in Harriet. Harriet is intended for young Bellair, who, however, is drawn to Emilia. Dorimant fobs off Mrs. Loveit on Sir Fopling Flutter, and young Bellair encourages Harriet and Dorimant. Dissimulation surrounds all the characters until the tangle is straightened out and the couples, Emilia and young Bellair, Harriet and Dorimant are to be wed.

The real fun of the play, however, comes in the character of Sir Fopling with all his antics. Here is a piece I wrote a few years ago for Salem Press about the physical world of the play:

Etherege’s play is one of the earliest comedies of manners, plays in which fashion consciousness and social concerns determine behavior. Although one might not think of geographical place being as important a factor in comedies of manners, the fact that this play is set in fashionable seventeenth-century London matters greatly to understanding the world of this play, for in this play, London is the world of fashion and society.

London, England. We must understand that The Man of Mode is set in fashionable seventeenth-century London. The characters move easily through this world or mode of fine society, a world of playhouses, parks, and drawing rooms. Original audiences of upper class gentlemen and ladies, many of whom would be from the Court, would be familiar with the common places of London that are mentioned in the play. They would be familiar with the fashionable shops on the Exchange, mentioned in Act One, as well as the Inns of Court where the lawyers practice, mentioned in Act Three. Obviously, the vision of London in the play excludes most of the real London of the day, which would in reality be dominated by the merchant middle class and large areas of poverty-stricken dwellings and shops.

The Country Contrasting with fashionable London in the play is the understood world of the “country,” essentially anywhere outside London. The City represents all that is fashionable and modern; the Country represents the unsophisticated and out of date lives of such characters as Lady Woodvill and Old Bellair. Harriet, accompanying her mother to town sees her only hope for a satisfactory life in making a marriage that will assure her a residence in London. Dorimant, at one point in Act Five, vows to move to the country if that is what it would take to marry Harriet. This vow shows the sincerity of his intentions toward her.

The Mall and Other Parks. Much of the play occurs out of doors in the fashionable “Mail” or Mall area of St. James Park. The Mall was a long tract in St. James that was formerly used for playing paille-maille, or pall-mall. By the time of this play it was known as a fashionable park used for walking, for meeting lovers, and for displaying one’s fashion. It is often confused with Pall Mall, another park close by to the north. In The Man of Mode the Mall is contrasted to Hyde Park, or High Park, another, much more fashionable area of leisure.